How to boost profit with popunder advertising?

You know, popunder ads have their own pros and cons. Still in many cases cons seem to be not so scaring compared to benefits from pros. That is why thousands of brand promoters, affiliates and networks choose pops as a great tool to increase their profits!

So, let’s go in to discover why!

What is a Popunder Ad?

Popunders (on-click) or pops are ad formats which have become rather popular over the last years. There are numerous ad networks working with this type of online advertising, and more and more advertisers and webmasters are choosing popups and popunders to boost their profits.

Let’s define the difference between popunders and tabunders, which may at first seem rather similar. A tab opens in the same window. It can open over the active tab (tab-up) or behind it (tab-under).

Popups are new browser windows which open over the main or active window.

They are thought to be more aggressive than pops which are viewed only after the active browser window is closed. All of these types use a Javascript code in order to be displayed.

Pops may be different. Below are just a couple of examples. You’ve most likely seen lots of them already. 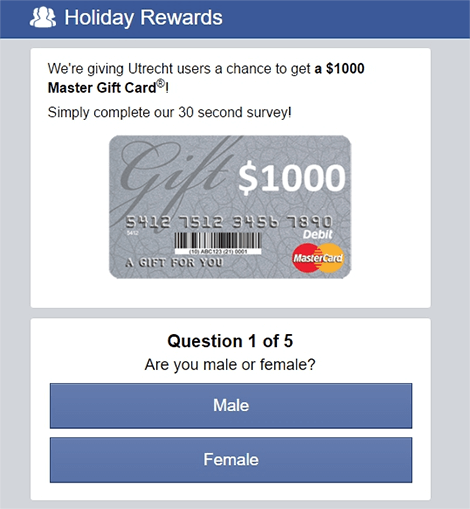 How to Advertise with Pops?

Pops are used to generate leads. There are two popular ways to do that: via redirect, leading to the advertiser’s page with an offer, or via a pre-lander, a sort of a landing page with no form to fill in but with a Call-to-Action (CTA) button.

Pre-landers are used for the purpose of playing with a user, warming them up before making a direct offer. Sometimes there can be more than one pre-lander to gain a conversion.

Let’s take a look at how it works:

Why you should use Popunders

When you come up with the decision to advertise online, you may think of different ad formats and even try some.

Despite the idea that pops disturb users, they actually convert much better in comparison to many other ad formats, sometimes reaching up to 300%+ boost in ROI.

Pops also win when we consider the problem of “blindness” or, in other words, the users’ neglect that banners and display ads suffer from. Users have to interact with popunder ads more consciously.

Keeping in mind that pops target the right audience, they have a better chance of being viewed.

All these types use Javascript code in order to be displayed. Pops are run on and adapted to different platforms: desktop, laptop, tablet and mobile. Such flexibility makes them rather popular with advertisers willing to reach their audience wherever it is possible online.

Banners have problems with view-ability on the mobile screen, videos may not run because of different settings and are almost useless with the sound switched off, but pops show up and work in any case, every single time!

How to Launch a Campaign with Clickadu

You have a choice of being managed or self-served with the help of a handy platform making available to launch and optimize multiple any-target campaigns.

As a rule, it takes a couple of minutes to sign up and approve your account. After that, you make a draft of your first campaign, which is normally approved within hours.

At Clickadu we work on the following pricing models:

Even so, the two most popular pricing models are CPA and CPM. At the self-serve platform you may choose between CPM and SmartCPA, a fully auto-optimized algorithm, matching your CPA offer to users interested in such content.

You can choose the frequency and capping of your ads. Frequency shows how many times the ad will be displayed, while capping defines the period of impressions.

We do not recommend setting too many impressions per 24 hours. Users will most likely get annoyed. It generally makes no sense, and you will just waste your money.

The last thing to do is to make a deposit by any convenient method. The most common methods are: wire, ePayments, PayPal, Paxum, Webmoney, etc. Make sure to specify the daily and total campaign budget.

This sum may differ depending on the offer itself, the campaign settings and targeting.

Well, What About Targeting?

You can also choose websites you wish to advertise on so that the right customers could see your ads.

What else is important while launching the campaign?
A time schedule! Some advertisers may be worried about the specific weekdays in which their ads are gonna be displayed. For advanced targeting, you may set not only days but also hours. Let’s presume that the audience interested in your product spends time on the Internet on weekday evenings and also during the whole weekend. You can set up the hours for each day and track the results.

Alarm! No Traffic! Now What?

Popunder traffic is all web traffic generated by displaying popunders. As simple as that.

Imagine that – all of a sudden – you see no traffic. First of all, you should go ahead and check your account balance. If you have funds, check your campaign status and budget settings.

When your campaign’s daily budget is reached, your ad will no longer appear for that day and will later reappear the next day until you pause the ad or the total campaign limit is reached.

When your campaign’s total budget is reached, your ad will stop being active, unless you increase the limit and restart the campaign.

With the help of a traffic estimator, you can see how many estimated impressions of your ad are available according to your campaign’s bid and targeting settings.

Campaigns targeting high-quality countries and popular ad placements (zones) must have very competitive bids to be able to receive traffic. Moreover, the prices change frequently, since they’re being operated in real-time.

When targeting, you may also make lists of “good” and ‘bad” zones (websites). However, this can be done after you launch the campaign and track the first results.

If some of the zones chosen do not meet your performance targets, you may block them, thus making a blacklist.

The same campaign will show you high-performing zones giving a positive ROI. They could become a part of your whitelist. The lists can be enormous indeed, sometimes reaching up to 1000 zones per campaign.

Save the lists to use them in the future with the same targeting. Be careful with a blacklist, though! Zones which are performing poorly for one campaign can be good for another!

As mentioned above, time matters. To gain more and spend less, make sure you set a reasonable ads schedule. You can use the following tips describing conversion dynamics on some popular GEOs.

As you may see, these are only general trends without any reference to offers.

Driving US traffic to your campaigns will bring more conversions in the period from 7PM to midnight and less from 3 to 7AM. 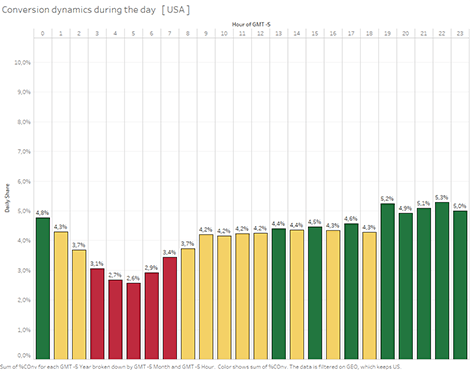 Thai traffic converts worse from 2 to 7PM. The night time from 1 to 7AM is also rather bad for conversions. However, you may get more results from 8PM to midnight. 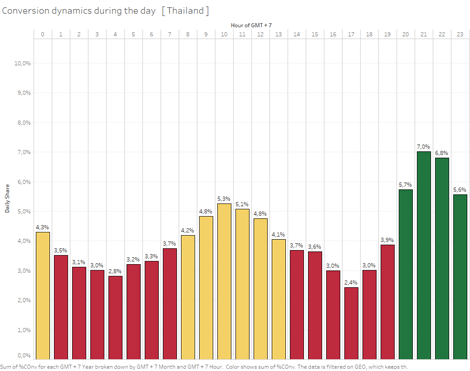 If you are interested in Indian traffic, your campaign can be more effective for a couple of hours from 8:30 to 10:30 PM and it might show fewer conversions from midnight to 7AM. 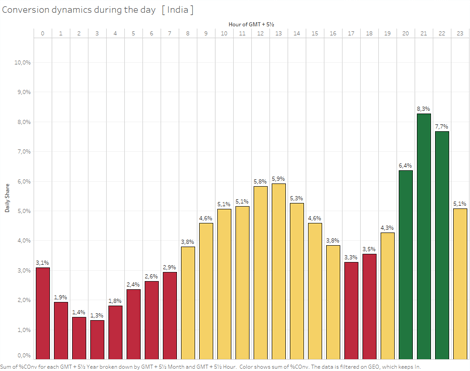 Japanese traffic converts better from 7PM to 11PM and worse from 1AM to 9AM. 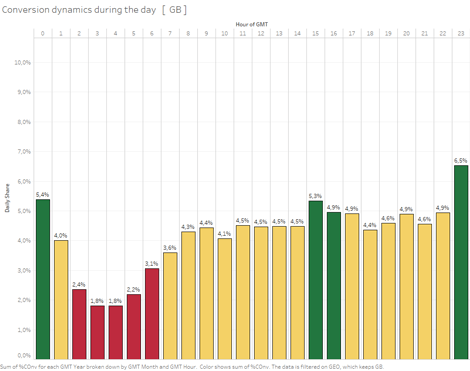 The conversion rate for Brazil is as simple as the Indian CR.

The period from 1AM to 11AM is a dead zone for conversions. But you’d better launch your Brazil-targeted campaign before it starts converting, from 8PM to midnight. 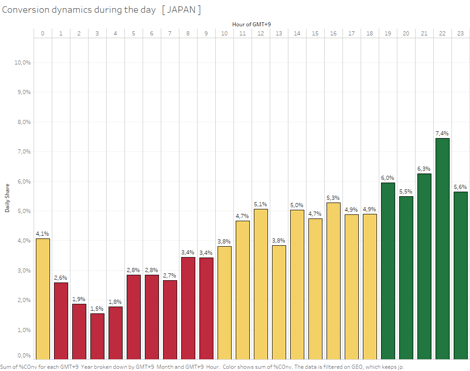 The dynamics of British traffic look completely different. Most conversions occur from 3PM to 5PM. In the evening, the results are rather average.

And then a boom again, just for an hour, right before midnight. You can understand that bedtime starts pretty early for the British. 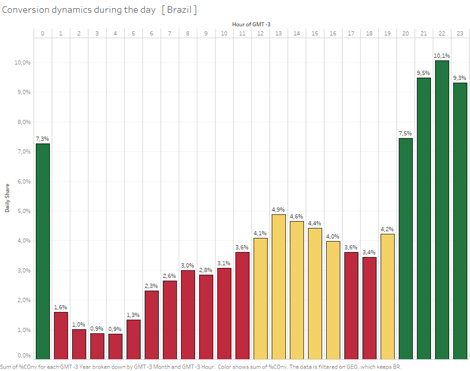 These tips are not like rules, as I’m sure you know. They’re only statistics we have, and you may try to use these tips to make the most of your campaign.

Some ad networks pay a lot of attention to security. The protection of personal data, transactions and products must be a priority.

Max Baldwin, Head of IT Department at Clickadu, says that our guys regularly analyze behavioral factors. Bots are easily detected by our own IT tools which react to non-standard unknown requests.

They are accepted individually via banking details. All transactions are totally protected. None but a client can administer funds which should also be approved by the financial department.

Popunder advertising is actually pretty easy in use and may be really profitable if targeted correctly. You may use the tips above in order to launch a successful self-served campaign. If you would like to be managed it will be easier for you to communicate with any ad network manager.

To speak about certain budgets and ROI is always complicated for it depends on a lot of things.

However, as regards popunder ads, webmasters gain on average a 30% rise in profit, while the boost for advertisers may reach even up to 300% or more. Well, again, it depends.

The army of popunder advertisers is increasing from year to year, mainly because of a lot of newbie affiliates willing to try the simplest schemes.

Still there are experienced ones switching from other ad formats to pops as different products work better with specific ads.

More and more advertisers are tapping into popunders in order to generate leads and enhance brand awareness.

“We have seen a 230% growth of popunder traffic over the last year — from 1.5B impressions per month in April 2016 to 5B today. And we are expecting to keep the same pace”. Galina Grigoreva, Head of Marketing at Clickadu.

So, demand is growing together with the market, and you’d better not miss any opportunity to get the most of it.

This material was prepared by Clickadu Team for Mobidea Academy.

Have you got to the end of the article? Well done! For the most target-driven and patient we have a joining bonus — $10 extra with your first deposit. Sign up and insert your bonus code WANT10 in the registration form here. Expose your brand to the 100% targeted audience and increase your ROI!